In past fall posts, we’ve talked about Hawk Watch, the importance of leaving the leaves, doing your tree work now, and cleaning up your garden for the winter. This October, let’s talk about an invasive plant we can easily see once the colors of the leaves change.

You probably already know that in the process of photosynthesis, plants produce chlorophyll. Chlorophyll causes the verdant greenery we experience each growing season. By September, the decreasing daylight hours spur the reabsorption of nitrogen from the leaves and back into the woody tissues of the tree. This helps to protect the tree from the deep freeze of winter. Dropping air temperatures cause the petioles, or the bases of the leaf stems, to dry out. This drying out prevents water from entering the leaf, which also prevents the production of chlorophyll. Once the leaves stop producing chlorophyll, the green fades, exposing the true colors of the leaves. 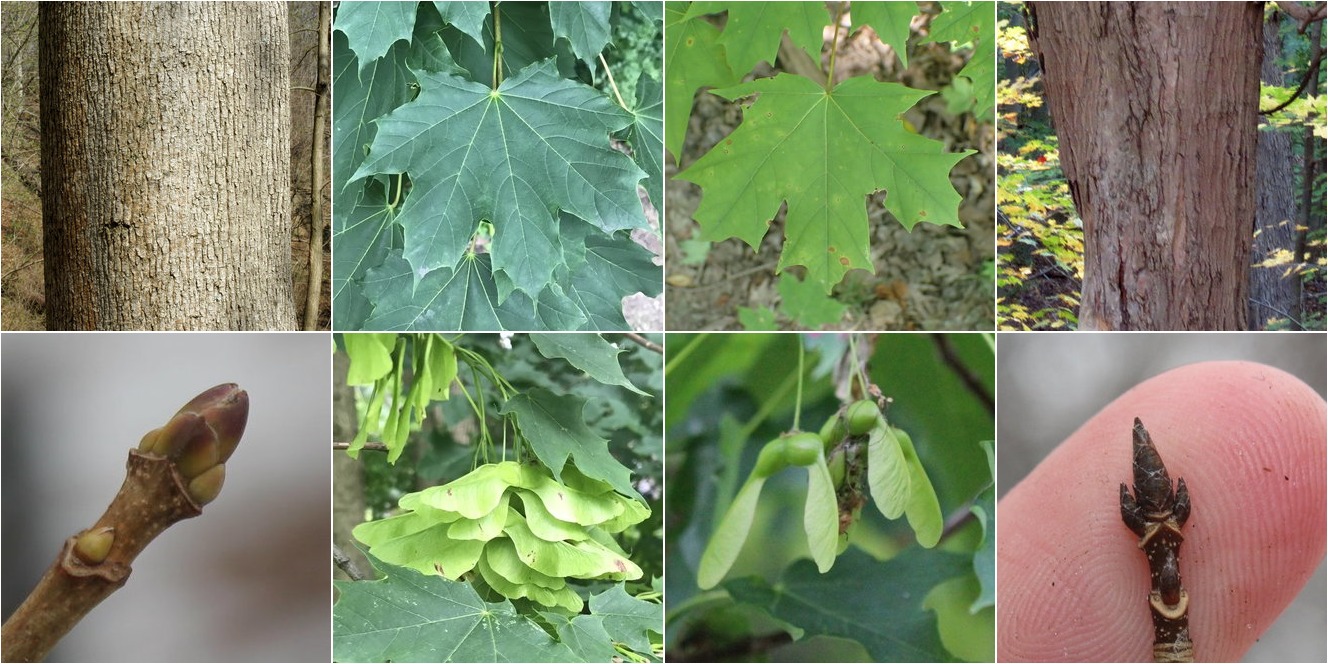 On the left in this image is a Norway maple. The right is our beloved sugar maple. Just looking at the leaves is not enough to be certain of identification, as the shapes are incredibly similar. Color (while the leaves are still green) is not the way either, even if it might appear to differ in these photos. That’s largely a result of light and camera lens. Bark can be difficult too, especially on young saplings. Most people also wouldn’t know the difference between tree buds, though it is a useful tool to have in your arsenal. The seeds make it very easy to identify when it’s the right time of year. The seeds or fruit, known as the samara, are very large and flat on the Norway maple. If you hold them up to your nose, they look rather like a silly mustache. Turn the samara of a sugar maple upside down, and you get a shape resembling a bucket, much like the ones that have been used for sugaring.

Now let’s say there are no samaras to be found, or the trees have littered the ground with a variety of samaras. Sugar maples and Norway maples are often neighbors. You’ve checked the bark and the tree buds, but you can’t be sure whether you have a Norway maple or a sugar maple in front of you. You can check right now, during this very month.

In October, Norway maples in Connecticut turn yellow. Xanthophylls, which are yellow pigments, are present in their leaves. Meanwhile, sugar maples contain xanthophyll, carotene (oranges, like the ones found in many varieties of carrot), and anthocyanin (red). Sugar maples in sunny spots with cool nights will explode with reds and oranges. In shadier areas, they will blush orange and yellow. The range is really quite beautiful. If you have a clump of maple trees on your property that looked like sugar maple to you, but they’re yellow in the fall? Reconsider. You can double check by breaking off a leaf stem. If it exudes a milky sap, rather than a clear, watery sap, you’ve definitely got the invader.

Why should we remove the Norway maple? Consider this statement from the New Hampshire Department of Agriculture:

The ecological impacts, loss of natural habitat and reduction of species diversity, is a result of Norway maple’s ability to
create dense shade from its overlapping broad leaves/canopy. They also negatively affect the natural successional changes
of forest habitat by the release of allelopathic chemicals from their shallow rooting system. These chemicals inhibit or
prevent the establishment of other plants within the root-zone thus eliminating competition for water, nutrients, and
light. These impacts to native vegetation are also amplified by its ability to uptake large amounts of water from the soil.
The lack of adequate groundcovers can promote erosion and loss of soil, which has the potential to cause water quality
and turbidity impacts to surface waters and wetlands.

Also, sugar maples are part of our gorgeous New England heritage. It’s worth promoting their growth over that of the Norway maple.